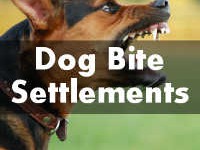 Like many other states, New Jersey has adopted Dog Bite Laws to protect victims against unruly or aggressive attacks by dogs.  These laws allow victims of dog bites to sue the animal’s owner for damages, medical bills, and pain and suffering as a result of the dog attack.

If a dog bite occurs either in a public place, or on private property with permission or invitation, the dog’s owner is liable under the Dog Bite Law.  The only two exceptions to this law are if the bite victim is illegally trespassing, or if the victim had incited or tormented the dog first, causing the dog to bite in self-defense.

In New Jersey, dogs do not get a second bite.  Once a dog has bitten someone, it is classified as a “potentially dangerous dog” and the owners must pay for registration, tagging, and tattooing of the animal as such.  Owners of potentially dangerous dogs must then take extra precautions for prevention of further bites or attacks.

Due to the Dog Bite Laws in New Jersey, many court cases have been won or settled with large cash amounts awarded to the victims.

If you have questions about dog bite attacks and your legal rights, contact the skilled New Jersey dog bite attorneys at Personal Injury Law Firm of Jontathan F. Marshall. Call 877-450-8301 for a free consultation.