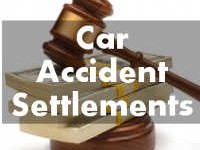 Motor vehicle accidents are some of the leading causes of personal injuries in New Jersey. Over 240,000 car crashes occurred last year on New Jersey state roads alone. Auto insurance rates are high in order to cover the required payouts and settlements of many of these car accidents.

Because car crashes can result in numerous injuries and expensive damage, it is necessary to file claims for reimbursement. Medical bills, pain and suffering, and repairs all add up. Each crash is different, but some motor vehicle accidents in New Jersey have resulted in very large settlements.

Here are some examples:

Every accident is different, but even in New Jersey, a No Fault state, there are still ways to recoup costs incurred by motor vehicle accidents.

When people are injured and property is damaged, it is important to know where to turn to get some of those costs returned to you. That’s where the experienced New Jersey car accident lawyers of The Law Offices of Jonathan F. Marshall can help. Contact us today for a free consultation.